The Best and Worst States for Auto Insurance Premiums 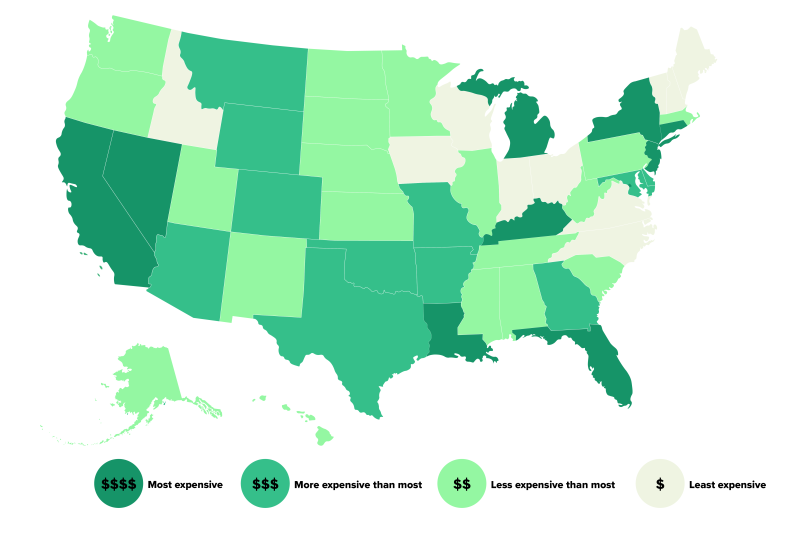 It’s no secret the cost of gas and tolls vary a lot depending on where you live. It turns what you pay for auto insurance does, too.

Disparities in the state-to-state costs of insuring a car can easily total a hundred dollars or more a month. According to the data from online insurance broker Insure.com, a representative 40-year-old male with a clean record who fully insures a typical 2020 vehicle would pay about $1,100 a year in Maine or New Hampshire. In Michigan and Louisiana, by contrast, the same coverage could cost $3,141 and $2,600 respectively.

That range, of more than two-and-a-half times, actually exceeds the range in different prices that Americans pay for gas depending on location. Gasoline prices range from a low of $1.51 to just under double that at $2.87.

Why such differing costs to insure a vehicle depending on the state? Potential factors include the states’ respective insurance requirements, theft and insurance-fraud statistics, percentage of drivers who are uninsured, and incidence of bad weather that damages cars, such as hailstorms. We cover some of those price determinants when introducing the lists of the states with the highest and car-insurance premiums.

The data will help you if you’re planning a move, or if you merely want to brag to friends in Nevada (the third priciest state, at $2,400 a year) about how little you pay or whine about your bills to family members in Ohio (the third cheapest state, at $1,191 a year). The average premium across all states in the survey was $1,732. (For more on how this data was gathered, see the methodology at the bottom of the story.)

Of course, our data is no more than a comparative snapshot of full insurance on a new car; your insurance bill will invariably differ from our figures. Even within a state, rates vary according to the city or county where you live. They’re also affected by the car you drive, your age and driving record, and the policy options you choose, such as the deductible amount and types of coverage. Rates can also vary a lot among insurers, so it pays to shop around for the insurance you need to keep your wheels on the pavement.

Where car insurance costs the most

The places with the priciest car insurance are literally all over the map — from north (Michigan) to south (Florida, Louisiana, Kentucky), and east (New York, Rhode Island, and Connecticut) to west (California, Nevada).

Michigan has the highest average premiums in the nation by far, running about 20% above those of any other state. However, this data doesn’t yet reflect state insurance reforms introduced in July 2020, which are already reducing premiums by between 15% and 53%, according to the Michigan Department of Insurance and Financial Services.

The Michigan reforms include reductions in required liability coverage and measures to reduce the number of uninsured drivers on the state’s roads — with 20% of drivers without insurance, Michigan ranks well above the national average of 13%. Two other states on the list also have unusually high proportions of uninsured drivers: Florida at 26%, the highest incidence in the country, and the District of Columbia, at about 16%. When an uninsured driver crashes, the cost of the accident is passed along to insured drivers, either directly through higher premiums or, in some states, through mandatory uninsured driver fees.

Underinsured drivers can be costly, as well. For example, Louisiana, which has the second-highest prices in the nation, has such low state requirements for liability coverage that a drivers insurance can fall short if they’re found responsible for a major accident. As with uninsured driving, the costs may again be underwritten by the premiums of insured drivers.

Where car insurance costs the least

Less congested roads lead to fewer crashes, and fewer accident claims for insurance to cover. That’s a key reason that so many of the states on this list are sparsely populated and rural.

Half of the top 10 states for cheap car insurance, including Iowa and Idaho, are below-average in their population density, according to USA.com, Maine and Vermont are also on that list, and Stacker magazine calculates that they are the most rural states in the country.

In other states, further factors come into play. For example, Ohio, the third-cheapest state on the list, has 250 companies that write car-insurance policies, according to online broker insure.com, which credits that healthy competition with keeping rates down in the Buckeye State.