When Your Insurer Decides Your Home Isn’t Worth the Risk 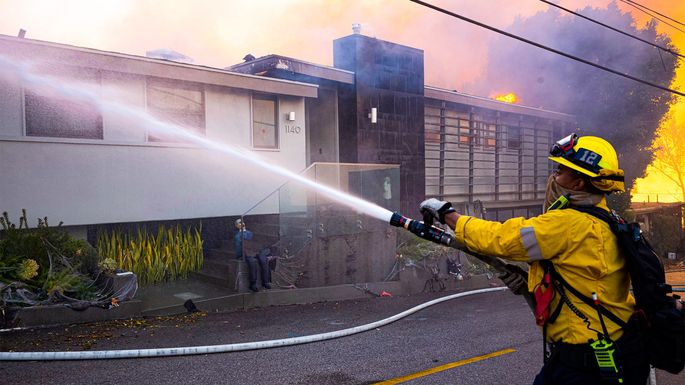 As if living through a string of deadly wildfires weren’t bad enough, some California homeowners were further burned when their insurers wouldn’t renew their fire-protection policies. In response, California last week announced a one-year moratorium forbidding insurers from dropping customers who live in or adjacent to ZIP Codes affected by recent wildfires.

While the measure offers some temporary relief, it may not help homeowners seeking a new policy for fire protection. There are also fears that insurers will ask the state’s Department of Insurance for across-the-board rate increases—or stop doing business in the state altogether to avoid further losses.

“The problem with that is that carriers are not nonprofits. If you strip away their ability to underwrite, they can’t afford to do business,” says Karl Susman, a Los Angeles-based insurance broker.

Over the past four years, insurers have declined to renew the policies of 350,000 California homeowners who live in areas at high risk for wildfires, according to the California Department of Insurance.

The problem isn’t limited to California. Homeowners on the East Coast and the Caribbean are losing coverage as well. In Florida, tens of thousands of homeowners have been dropped by their insurers in recent years because of the high risk of hurricane and water-related damage. Even homeowners unaffected by fire or hurricanes can receive notice that their policies won’t be renewed, with companies citing repeated claims and other risk factors.

After learning they have been dropped, homeowners basically have three options, but each one has its drawbacks.

First, if you receive a letter saying that your policy won’t be renewed, talk to your insurance agent, or call the company directly, and state your case for reversing the decision. (California has asked insurers to voluntarily stop dropping customers statewide because of fire risk.) The larger insurers often rely on risk-modeling algorithms to determine areas prone to disaster, says Amy Bach, executive director of United Policyholders, a national consumer-advocacy group. The models typically use satellite data, so the margins around supposed high-risk zones are imperfect. As a result, some homeowners are dropped even if their property is relatively safe.

Even if a home is located in a verified danger zone, adding disaster-resistant features could make your home more insurable, according to the Insurance Information Institute. For example, removing plantings and trees near the house and replacing siding with a noncombustible material, such as stucco or fiber cement, can mitigate the damage of wildfire. Many neighborhoods are forming Fire Safe Councils that undertake wildfire-preparedness measures throughout the community. One insurer offers discounts to homeowners in cities with a “Firewise” certificate from the National Fire Prevention Association. In hurricane-prone areas, securing the roof and installing wind-resistant doors and window shutters can minimize wind and water damage. Still, these measures may not be enough for insurers to reverse a nonrenewal decision, Ms. Bach notes.

The second option is to shop for comprehensive coverage from a different insurer. Just be prepared to pay higher premiums. An independent insurance agent—one who offers policies from a number of insurers—will know which companies offer coverage in your area.

When standard coverage from a major insurer isn’t available because of risks in your area, many homeowners turn to a “non-admitted” insurance company, so called because they aren’t licensed by the state’s department of insurance. As a result, they are less regulated than “admitted” companies, and homeowners aren’t protected if the company becomes insolvent.

In Berkeley, Calif., homeowner Nigel Guest received nonrenewal notices twice—each from a different insurance company. Mr. Guest, 71, a retired environmental consultant, owns a roughly 2,500-square-foot, hillside home that was recently appraised at $1.85 million. Last year, he got a letter from his longtime insurer, saying it was no longer providing coverage for properties in his neighborhood because of the wildfire risk. After a scramble, his agent was able to get him a policy from a “non-admitted” insurer. But in June, Mr. Guest was notified that the company wouldn’t renew his policy, citing limited access to his property—a single road in and out—that would hamper rescue or escape in the event of a wildfire.

After another scramble for coverage—with only days to spare before his policy expired—he was able to get fire coverage from American Modern, an Ohio-based company that is “admitted,” or licensed to write policies, in California. He was able to get a basic policy for $3,680 a year, up from $1,460 a year before receiving his first nonrenewal in 2018. ($1,000 of it has since been refunded.)

The third option for homeowners who have been dropped is a state’s FAIR plan, which stands for Fair Access to Insurance Requirements and is considered the insurer of last resort.

California’s FAIR plan is limited to fire damage, leaving homeowners uncovered for things like theft, water damage and liability. However, in November, state Insurance Commissioner Ricardo Lara announced an expansion of FAIR plan coverage. Starting April 1, coverage limits will increase to $3 million, up from $1.5 million. And starting June 1, the policies will offer comprehensive homeowners policies that include coverage for theft, water damage, falling objects and liability.

Last week, in early December, however, FAIR plan President Anneliese Jivan released a letter calling the expanded coverage “misguided” and asked the Department of Insurance to withdraw the order. Among the reasons cited are the lack of funds and resources to implement the order. A spokesperson for the Department of Insurance says the agency will meet with FAIR officials to work on implementing the commissioner’s order.

The difficulty of buying insurance in high-risk areas could hit the housing market.

In Sacramento, Redfin agent Debbie Olson says she represented a couple in Auburn, Calif., earlier this year who found a home they loved in their preferred neighborhood. But a quote just for fire insurance came in at $9,000 a year. The sellers offered to pay half of the costs for two years as part of the deal, but ultimately the couple purchased property in another neighborhood with lower insurance premiums.

An analysis of 10 high-risk counties in California by real-estate website Realtor.com found that sale prices have flattened or fallen since 2017. Sierra County, for example, experienced almost 30% growth in sale prices between 2017 and 2018, but saw sale prices fall 1.9% between January 2019 and the end of August. While price declines can’t be blamed entirely on the wildfires, four of the 10 high-risk counties saw sale prices fall since last year, and price increases in the other six counties slowed significantly, the Realtor analysis found. (News Corp, owner of The Wall Street Journal, also operates Realtor.com under license from the National Association of Realtors.)

“Nonrenewals are on the rise, threatening home values across the state,” said Ricardo Lara, commissioner of the California Department of Insurance at a news conference last month.

INSURANCE IN THE HOT ZONE

Shop for a policy that will adequately cover a total loss of your home due to fire, including building code upgrades. Then, if you can afford it, add supplemental coverage for things like flood and earthquake protection.

Since many states’ FAIR plans typically offer limited coverage, homeowners with those policies should also purchase “difference in conditions” policies to cover things like theft, water damage and liability.

Policies should cover the cost of replacing personal items (replacement cost value) instead of what those items are worth after depreciation (actual cash value).

To check the financial stability of a non-admitted insurer, ask your agent to check the insurer’s rating on the A.M. Best or Demotech websites.